The Mandalay Bay Resort & Casino is a resort located on one end of the Las Vegas Strip that opened in 1999. It is next to the McCarran international airport of Las Vegas. With 43 floors and 3,309 rooms and suites, the Mandalay Bay is a really big hotel, among the largest in the world with the MGM Grand and the Venetian. The Mandalay Bay is easily recognizable with its gold color. This one comes from the gold leaf used to color the windows. The hotel is all set around the tropical theme.

You can easily reach the Luxor and the Excalibur from the Mandalay Bay by using the tram or by walking through the air conditioned corridors.

All the guest rooms and suites have floor to ceiling openings. Some of them have a direct Strip view, others have a view on the desert and the mountains surrounding Las Vegas. Complimentary WiFi is available in all the guest rooms.

As in most of Las Vegas resorts, the Mandalay Bay has a lot of restaurants available to meet any expectation. Charlie Palmer Aureole restaurant has a 4 story wine tower thus allowing guests to select a bottle in a list of 3.200 wines.

The Mandalay Bay features several attractions such as the Shark Reef, one of the biggest aquariums in North America. Guests can walk through a shark tunnel. Several pools are also available. There is a wave pool, a lazy river, a European pool (Moorea) and pools for young children. Several shops are available at the Casino level and then in the corridors leading to the Luxor.

The Mandalay Bay casino is 135,000 sqm (1,453,000 sqft) large. It is part of the MLife loyalty program. Gamblers will enjoy its exotic and tropical setting.

The Mandalay Bay Event Center is an arena where concerts and boxing matches are organized. Up to 12.000 guests can attend to those events.

Several shows have made the Mandalay Bay legend such as Mamma Mia, Disney Lion King or Michael Jackson One by the Cirque du Soleil. 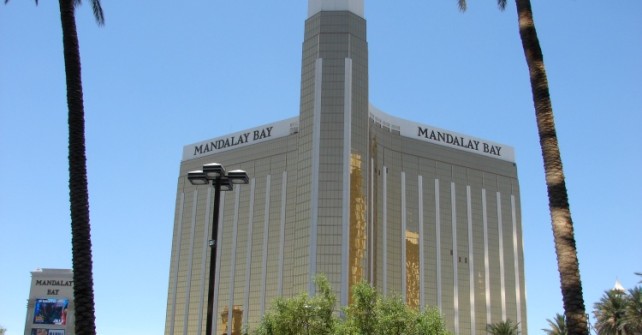