The story of the Hotel am Steinplatz began in 1913 under the direction of Angust Endell, also architect of Berlin’s Hackesche Höfe complex, received the duty to build a luxury hotel.

Following the October Revolution, this exclusive property used to welcome Russian Czars, aristocrats and intellectuals. Later, in the 50’s, it was usual to meet iconic actress such as Brigitte Bardot or Romy Schneider and literary greats like Heinrich Böll and Günter Grass.

In January 2014, the Hotel am Steinplatz reopened in a new stunning allure while safeguarding its historical statement.

Proudly standing in the elegant Charlottenburg quarter near to Berlin’s Tiergarten park, the Deutsche Oper and KaDeWe, Department Store of the West, the 5 star Hotel am Steinplatz first fascinates by its Art Nouveau 100 years old architecture. It distinguishes itself with geometric elements and casement windows in various designs. During the last three years project, the architect in charge, Claudia Dressier worked closely with art historians and architectural preservationists. 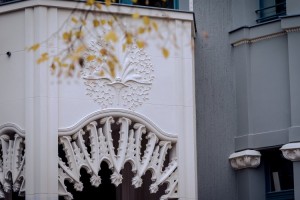 Fauna details of the facade 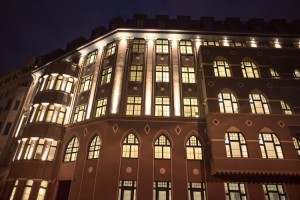 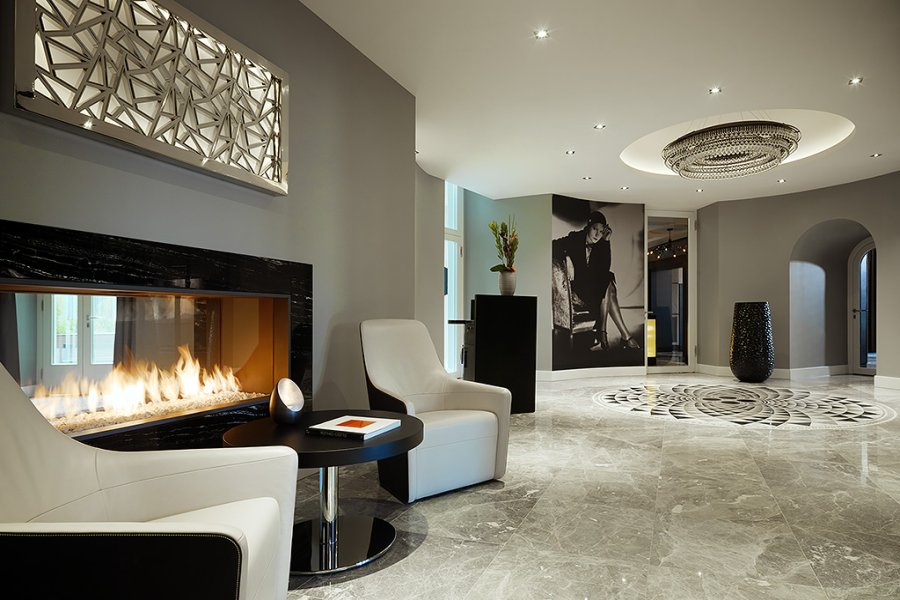 The fireplace in the lobby

Throughout the hotel, eyes are caught by subtle details from flora and fauna from the ornamentation on the entrance canopy, the balustrade or the leafy inner courtyard and its Gothic arches to the lobby or rooms. The noble materials blend gracefully with shells, bats and fern in motifs.

An individually design had been provided to the 84 Rooms, the Junior Suites and the 2 Spas Suites. It gives an interpretation of 1920’s atmosphere combined with today’s expectations. All orchestrated around natural material and tints punctuated such as chrome light fittings. Bathrooms, all in black and white, provides amenities from the Italian brand Etro. 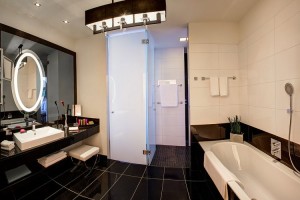 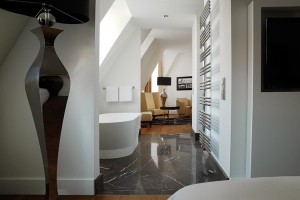 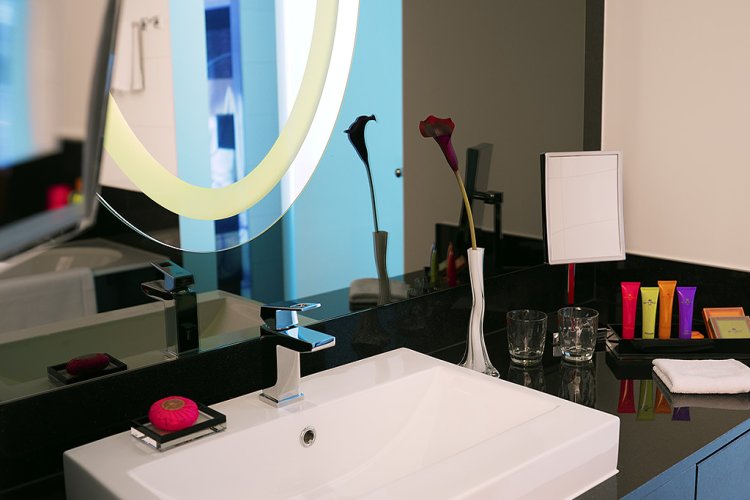 Headed by Chef Marcus Zimmer, the kitchen team cooperates closely with local suppliers. Even the herbs come from the hotel own courtyard.

The show kitchen offers conviviality to the elegance of the restaurant’s decor. In addition of the 50 seats inside, the guests may also dine in the conservatory area surrounding the courtyard or in the front hotel terrace.

Following the mood of the restaurant, the Bar am Steinplatz suggests Christian Gentemann audacious cocktail creations such as dry martini with porcini mushrooms or sorbet infused with sparkling German wine. A regularly changing seasonal panel of wines and beers from Berlin and its area is offered. 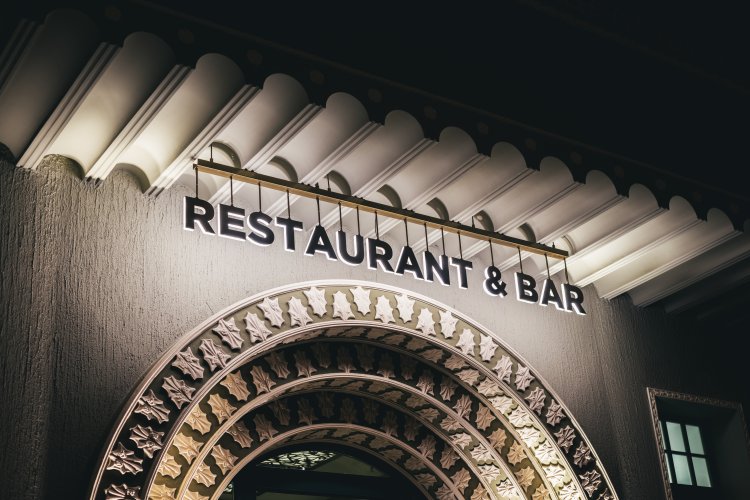 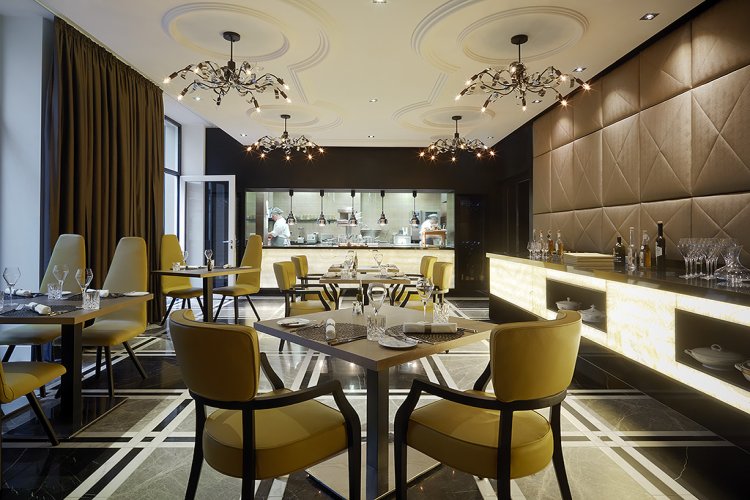 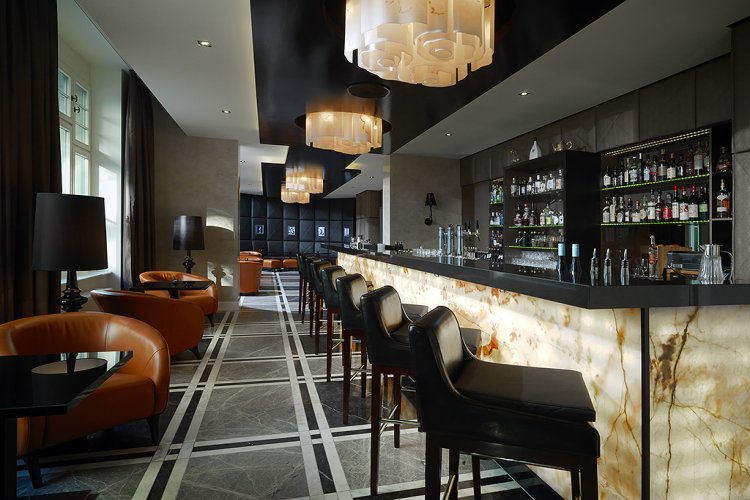 For well-being, you would enjoy the 300 sqm (3,229 sqft) of the Spa am Steinplatz and its sauna cabins, fitness center and relaxing space. It also welcomes guests not staying at the hotel for treatments, sauna and fitness center.

Cosmetics used at the Spa are coming from Dr Spiller, a German natural cosmetics line. 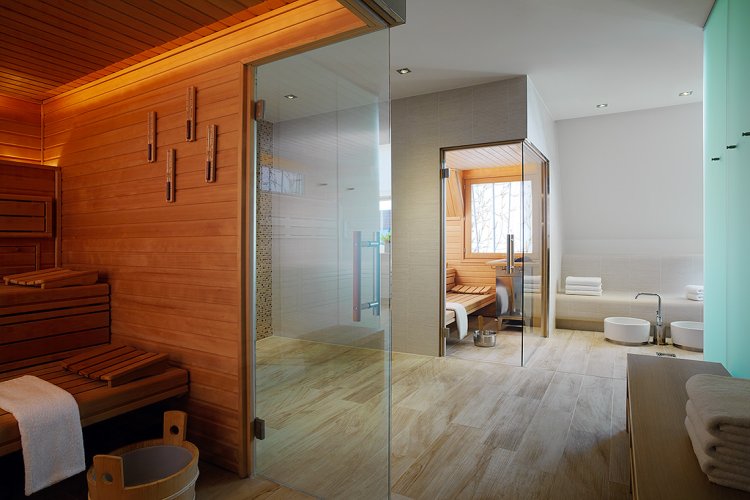